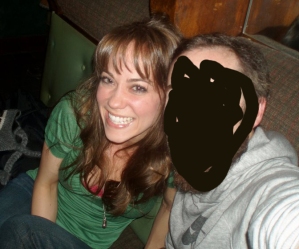 So you’re at a grocery store, and suddenly as you turn the corner you see your ex – they’re holding a box of pasta or some other food item, and they have their new significant other in-hand. You feel your heart sink to the bottom of your stomach and suddenly the last thing you want to do is eat.

Everybody knows this feeling. I have a whole rooster of exes, and every time I see one of them in passing this very feeling occurs. Even the most beautiful people in the world have exes they want to avoid, but it seems when you have a disability, we get the short end of the stick. People just can’t deal with our disabilities and we get rejected a lot more. The end result – we have more exes.

Now it usually isn’t my style to be such a negative ninny, but this is real-life stuff and it needs to be said. I think most people with disabilities can relate to this too. When you have a disability, especially when it’s acquired mid-relationship, we all await the dreaded day where our S.O. can’t take our disability anymore and leaves.

This doesn’t happen to all of us as course. Some of us happen to meet some fabulous people who prove there are still good people in the world. They’re just not easy to meet, which is the underlying problem (and a great topic for a future blog post). I would say though that only about 1 out of 100 people would seriously consider dating someone with a disability.

I do think however think our exes carry a significant amount of more guilt than if we were able-bodied, thinking our disabilities somehow make them more jerks for breaking up with us. The general public, family, friends, every facet of our society teaches us to be extra nice to those with disabilities. When they break up with us, their main fear is how they’ll be perceived.

As much as I like freebies and nice people, I dislike fake people even more, so I get angry men have to worry about this. If my boyfriend really doesn’t like me anymore, I’d rather have him break up with me than stay with me out of guilt. I just wish he would move out of state afterwards, because one of the most stressful things can be running into an ex, and it will happen to you at some point; mark my word.

It happened to me over the weekend in fact. I ran into an ex at a hotel, and his new girlfriend was an able-bodied version of me pretty much. It bugged me of course, but what did I expect? He wasn’t going to have another girlfriend who used a wheelchair. All of those paranoid-fueled comparisons entered my mind that all people with spinal cord injuries get whenever something like this happens.

We always fear we aren’t good enough, and that an able-bodied replacement is right around the corner. It’s a natural human fear. Replace “able-bodied” with younger, skinner, prettier or richer, and the rest of the world can relate.

It just never gets easy running into an ex, but when you’re single and wanting to find someone, it’s a risk you must be willing sign up for. Without risk there is no reward, especially when it comes to romance.

Does running into an ex cause you stress? How do you handle it?

The idea of spending the later part of your life alone, a time when you’re the most vulnerable and need someone in your life, is most people’s worst nightmare. Sadly when you have a disability, this can be pretty common.

It’s easy finding sex. The hard part, and the point of this post, is finding someone that will be there when all of this unpleasantness starts happening; someone who’s genuinely in it for the long haul. For many of us with disabilities, the unpleasantness is happening right now.

It can be tough finding people to overlook this, and we can’t very well force people to marry us. So here’s what I’ve decided to make sure I’m not alone when I eventually grow old – I will marry my friend Abe, a fellow quadriplegic whom I met in rehab 16 years ago. He’s also about 10 years older than me. And although there has always been mild flirting, it never went past that.

Abe too has been a wheelchair-user for a long time. While hanging out by a river back on the 4th of July, he fell off a cliff and broke his neck. That was in 1996, and being that he’s a born and raised North Dakotan from Bismarck, North Dakota, that’s exactly where he went after his rehab was over.

Although I wasn’t romantically in love with him, this was a huge bummer. His moving away meant I would rarely, if ever seen him again. At the time I couldn’t drive and he wasn’t able to drive either. Bismark was at least a 6 hour drive from Minneapolis (where I was) and neither of us had lots of money for chauffeurs.

He was like one of the girls when we hung out in rehab. That is why he was so endearing. We initially met in a larger group of disabled friends, and he was always the guy who had something funny to say. He would listen to my problems, offer advice, tease (one of his favorite things). He was and still is one of the nicest guys I’ve meet.

And I was totally right about rarely seeing him after he was discharged from rehab and moved back home. It’s been 16 years now, and I’ve only been able to see him a couple of times. But despite that length of time, we have pledged one of the most intimate things to one another – the pledge of marriage by the age of 50, as corny as that sounds.

We have promised to marry one another if by the time we’re up on our years we’re still single. This is a practical idea, as well as one that only friends could dream of and I absolutely love it. While I made this pledge when I was 19, I never thought I would still be single at my age. But hey that’s life.

If we do end up getting married it’s not like we’re going to fall in love and start being physically intimate. That may never come. What’s important is that we won’t be alone when one of us gets cancer, pneumonia, whenever, and that’s irreplaceable.

My question to all of you is – why not consider a friend-based marriage pact as the years inch up on you? It may sound a bit ridiculous, bum when 50 is looming and you’re still single, you may be glad the pact is waiting in the wings.

Have you committed to a marriage pact? Would you? I’ve been writing for dozens of disability websites for around 15 years, and giving relationship advice has been when of my fortes. I’ve always prided myself on giving people the tough advice no one wants to hear. When you’re disabled like me the tough advice is the most important.

I only bring this up because I’ve been terrible lately at taking any of the advice I have given. I think every girl out there is guilty of doing this – we like to tell everybody what they should do, but we struggle at taking the tough advice ourselves.  When you’re actually in the thick of it – it’s a lot harder to do the right thing.

This is especially the case when we find someone we really really like; the type you’d see a future with. The love that’s there can be strong, but we overlook several things about their personality in the process. I’m embarrassed to say that I’ve done this several times. Being a girl can really be annoying sometimes; and I blame these poor decisions wholly on my extra emotions and hormones.

So…what ends up happening is that we fail to end a relationship that needs to end.  Many of us with disabilities are afraid of being alone.  When I was younger, this was something I worried about a lot. I really believed there wouldn’t be that many people out there who would be ok with my paralysis. As it turned out however, there are a lot more people than I thought (oh how I love it when I’m wrong).

Another fear a lot of us hold onto is worrying about no longer having your significant other there to help. When you’re in a long-term committed relationship and you have a disability, chances are your partner will do certain things for you and you might have come to rely on it. A lot of fear can lurk behind losing your independence in a breakup.

But we’re just like everybody else when it comes down to it. When the love isn’t reciprocated both ways it can break your heart, but still…many of us don’t want to fully sever ties. We can be hopeless romantics and hold out hope that things might turn around. At least that’s how I feel that things.Many of us with disabilities are pretty romantic people.  Saying goodbye for good is one of the hardest things to do.

But when the break-up finally happens, a huge relief occurs and your future again looks bright.Maybe you don’t see the brightness right away and all you see is an unending line of mediocre dates, but there is brightness there (you just don’t see it yet). Ending anything you still find some joy from is never easy.  You really have to put on your grown-up pants and just do it.

You should also indulge in your favorite break-up activities.  I myself have a handful of go-to items when a break-up occurs: 1) My favorite chick-flick movies and TV shows, courtesy of my favorite website Netflix (anything that’s a period piece is currently in my queue). 2) Video games, especially RPG ones, courtesy of the online gaming community/network and store, Steam (you gotta love being able to get games for your computer without leaving your house). And 3) Foods that make me happy. This typically involve ordering pizza; Papa John’s with garlic sauce is where it’s at, as well as lots of baked goods (lots), and a nectarine thrown in for good measure so I don’t feel guilty.

Communication and relationships are without question the hardest thing about being human. We’re constantly learning lessons, growing as people and ending relationships is one of the biggest of them to learn. I wish all of you the strength to be able to do this one day.

And when you find that strength, have your break-up kit ready to go. You’ll do fine I promise. I always see the light after every break-up.  It’s hard, but when you see it, it’s the most beautiful light you’ve ever seen.

How have you ended an unhealthy relationship?